September 30, 2020 By Bruce Hosler No comments yet

Markets dropped early in September before partially recovering by month-end. The S&P 500 fell 3.80 percent, while the Dow Jones Industrial Average (DJIA) lost 2.18 percent and the Nasdaq Composite declined 5.10 percent. Despite a disappointing month, all three indices ended the quarter in positive territory. The S&P 500 gained 8.93 percent, the DJIA gained 8.22 percent, and the Nasdaq jumped 11.24 percent.
These results were supported by improving fundamentals. According to Bloomberg Intelligence, the blended earnings growth rate for the S&P 500 fell 31.1 percent in the second quarter. This was better than expectations earlier in the quarter for a steeper decline.

Technical factors were also supportive. All three major indices remained above their 200-day moving averages in September, although volatility brought the indices closer to their trend lines.

Fixed income markets were down slightly in September. The Bloomberg Barclays U.S. Aggregate Bond Index lost 0.05 percent but gained 0.62 percent for the quarter.

The public health situation was mixed during the month and quarter. We saw a rise in cases in July but made progress in reducing local outbreaks in August and early September. Although the national case growth rate finished the quarter below July’s highs, we saw an uptick in cases toward the end of September. This signals that the risks may continue to rise as we head into the fall.

Testing showed progress during the month. The average number of tests increased, although daily test counts were volatile. The positive test rate fell in September and ended the quarter below the World Health Organization’s recommended 5 percent level.

Despite a rebound in spending earlier in the summer, data released in September showed a slowdown in growth, though continued moderate growth remains likely.

The Conference Board Consumer Confidence Index had its largest monthly increase in more than 17 years. This is a step in the right direction, but Figure 1 shows there’s still a long way to go to get back to pre-pandemic levels.

Consumer confidence was supported by improvements in the job market. More than 3.1 million jobs were added in July and August, bringing the total to more than 10.6 million jobs added since reopening efforts began.

Businesses also showed continued growth during the month. Business confidence, as measured by the Institute for Supply Management Composite index, declined slightly but remained in expansionary territory. Durable goods orders and industrial production both increased but at a slower pace than earlier in the summer.

New and existing home sales hit their highest level since 2006 in August. With rates remaining near record lows and home builder confidence at all-time highs, the housing sector is poised for growth.

Recovery Continues, But Risks Are Rising

Although infections are up, the pandemic is still under control. Fundamentals remain reasonably supportive, and while the economic risks are real, the recovery is moving forward. Given all of this, prospects are positive, but volatility may be on the horizon.

In these uncertain times, maintaining a well-diversified portfolio that matches investor goals and timelines is the best path forward for most investors. If concerns remain, contact your financial advisor to review your plans. 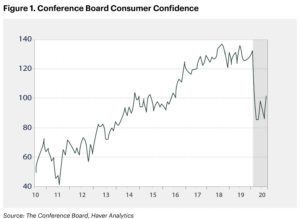